What is Benign Rolandic Epilepsy? 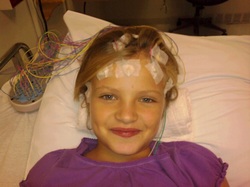 What is it like? Here's a typical story: "We heard a thud from Timmy's room one night. We rushed in and saw him on the floor, having a whole-body seizure. The next day, the pediatrician asked if Timmy had ever had any tingling or jerking movements in his face or body. We were shocked when Timmy said yes, sometimes his tongue would tingle or his cheek would jerk for a little while. The doctor did an EEG and said it was 'rolandic epilepsy,' and said that Timmy didn't have to be treated. That's what we wanted to hear. He had one other, milder seizure a few months later. He ran into our room and woke us up. He couldn't talk because the side of his mouth was twitching and he was drooling. Fortunately, it was over quickly. It's been 5 years now, and except for a few tingles and twitches, Timmy has been doing great."

A typical attack involves twitching, numbness, or tingling of the child's face or tongue (a partial seizure), which often interferes with speech and may cause drooling. These seizures last no more than 2 minutes and the child remains fully conscious. Sometimes the child also may have tonic-clonic seizures, usually during sleep. The seizures are usually infrequent, but they may occur in widely spaced clusters.

Who gets it? This syndrome represents about 15% of all epilepsies in children. The seizures begin at an average age of about 6 to 8 years (range 3-13) and are a bit more likely to affect boys. The children generally have normal intelligence, which is not affected by the seizures. The syndrome is more common in children who have close relatives with epilepsy.

Tell me more Benign rolandic epilepsy (BRE) is named after the rolandic area of the brain, which controls movement in the affected part of the face. It is also called by other names, especially benign childhood epilepsy with centrotemporal spikes (BCECTS). That name refers to certain patterns ("spikes") seen on the child's EEG, which help to identify the syndrome. Other tests, such as the neurologic examination and MRI (if performed), are normal. While the condition is considered benign -- since most children with the condition outgrow the seizures -- during the period of time when the disorder is active, some children will have learning difficulties and behavioral problems. The problems typically disappear once the seizures stop and the EEG reverts to normal.

How is it treated? Because the seizures may be infrequent and usually occur at night, many children do not take any seizure medicines for BRE. Medication may be prescribed if a child has daytime seizures, a learning disorder, a mild mental handicap, or frequent seizures during sleep. The seizures usually can be controlled by any of the common seizure medicines. Neurontin (gabapentin), Trileptal (oxcarbazepine), Tegretol or Carbatrol (carbamazepine) are most often prescribed in the United States.

What's the outlook? In almost every case, the seizures stop on their own by age 15.